Nine Reflections in Poetry on a Painting, Two Painters and a Dog

In this book Seán Gaffney explores, in the form of poetry, perceptual mirror references in the world of art, in relation to his inner, mental reflexions. By identifying with the different roles of the figures in Diego Velasquez’ painting ”Las Meninas” he gives life to both  the historical persons of the artwork and his inner relationships.

Choose your price in the web bookstore 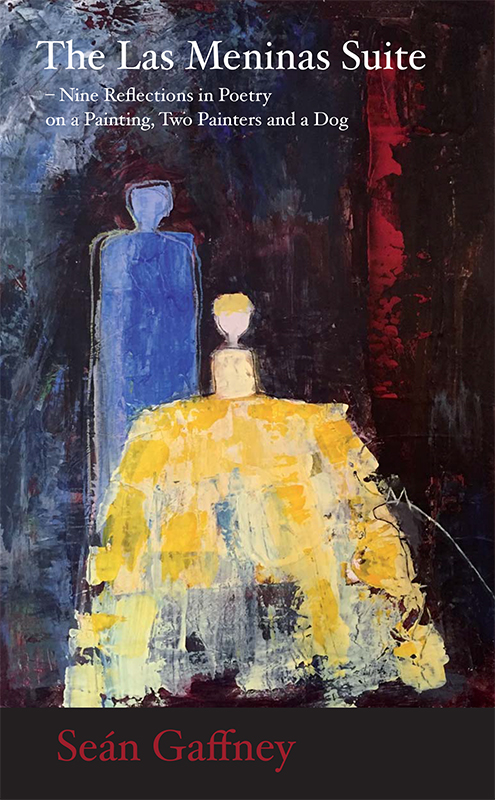 I first saw the Velázquez original in The Prado, sometime in the mid 1990’s, when visiting my dear friend and Gestalt colleague Eugenio Moliní in his hometown. Eugenio and I were both married to Swedish women, living in Stockholm and both on the Gestalt Academy of Scandinavia’s Gestalt Therapist Training Programme. He was a year ahead of me and our groups occasionally shared a time and location. We had become friends and started meeting as such outside of the training.

At that time in the Prado, I had ”ticked the box” for Velázquez, as I would then do for El Greco, Zurburan, Bosch… an art tourist doing the rounds.

And yet, Las Meninas stayed with me, almost followed me. On returning from Madrid and at the next annual Swedish book sale, I bought a book of reproductions of Velázquez.

Some years later, another Gestalt colleague, Dan Bloom, asked me to comment on his proposed home page. I immediately recognised the decorative border he had chosen as taken from Las Meninas, and reacquainted myself with the painting in my book of reproductions.

Four years ago I travelled to Barcelona with my two sisters and our aunt for a short holiday. In the meantime, Eugenio had moved from Madrid to the Barcelona area, and was pleased to be our guide.

While in Barcelona, I visited the Picasso museum – and came face-to-face with his 58 variations on Las Meninas. I be- came aware of a strong driven need to visit the original in the Prado, to see it as if for the first time. To meet with what I had somehow missed on my first visit…to meet with what was calling for my attention.

And so I found myself back in Madrid, And back in the Prado. And back, astonished and humbled, in front of Las Meninas.

And ”surrounded” as I write in Reflection 1, ”by half of Asia”, the first lines of that piece sounded in my head…and continued to do so for the remainder of the day, evening and night. When I awoke the following morning, Reflection 1 was essentiallyfinished and secure in my memory. I would not commit anything to paper or to a computer screen until I returned to Stockholm, the following week. This is how I have composed my poems since I was 16: turn the lines over in my head until they gell and feel complete, and the turning over has stopped.

In addition, having made the transition from fountain-pen to typewriter, to electronic typewriter, I had now become a hardware nerd – all the latest gear, and little or no idea of how to use it. So I did not really trust myself to know how to enter and save Reflection #1 in my lap top in Madrid and be sure of finding and transferring and saving it succesfully onto my desktop in Stockholm.

Once I had typed Reflection #1 on my desktop computer and started looking at Googled images of the painting, Reflec- tion #2 arrived in the same way; an opening line leading to another, and then another, a first verse and then a second. And so on until completion.

And so it continued until Reflection #9 was finished.

I was so excited by what was happening that I started sharing the poems as they came. First in line came Eugenio, with whom I had spent so much time in Spain during the emergence of what was becoming this Suite: and then my special pal Paula Keenan in Belfast, then my Gestalt colleague, friend and painter/sculptor Lars Berg and also my friend Joanna McMinn in Belfast. Each of these had in turn encouraged me to continue with this creative process, which I was anyway doing. The truth is I could not have stopped myself. The Las M eninas Suite as presented here, essentially wrote itself. Revisions have been at most a minor shift to the rhythm of a line, or a single word added or subtracted or exchanged.

Now, Lars is more than a Gestalt colleague. He is a friend, designer of my homepage, publisher of my Ph.D. submission for the University of Derby, England. And my hope was that he would bring my work from the emerging sections of an integrated suite to a finished book with all of his creative presence.

As we moved into this new possible shared endeavour, he then informed me that he had been diagnosed with a potentially terminal illness, and was putting all work aside to focus on his health and his family. Of course.

So…the whole project slowed to a halt. But not the drive I felt to push towards publication. I still, today, cannot say where the source of that energy was – to bring the suite – my tribute to Velázquez and Picasso – to completion, or to publish my first, and possibly last, book of poetry, or some complex combination. Whatever the source of this vector of my social field (Google?), its direction was clear and its strength unmistakeable.

So when my friends and Gestalt colleagues, Per Andersson and Iréne Grönwall and I and Iréne’s daughter – my buddy Isa – finally found a suitable date for a dinner, another idea formed. Per is Chairperson of the Gestalt Academy of Scandinavia, based in Stockholm. Iréne is a Gestalt practitioner in organisations and training, and an alumni of The Gestalt Academy, former student of mine – and an exhibited painter!

So – over an aperitif on their balcony, I described my predicament to Iréne and asked if she would be willing to consider a contribution of some sort, with Lars’ knowledge and possible collaboration.

Iréne agreed. This in turn led to her working on her oil painting, which Lars used for a flyer about the forthcoming book. That oil is now alongside my framed reproduction of Las Meninas on my kitchen wall opposite my writing-place at my kitchen table. Between then is a framed combination setting of the Velázquez and a Picasso version…

Lars had prepared a flyer using the proposed book-cover, and I had a good supply of them with me. I knew that Lars was attending the conference, as would Dan Bloom and other colleagues from the New York Institute for Gestalt Therapy, including Perry Gunther. I knew Perry had facilitated a workshop at the institute on ”Contemporary Art and The Contact Boundary”, which had been much appreciated and I was looking forward to an opportunity to talk with him.

I met him and his wife Robin in the reception area of our hotel, and he referenced a workshop I had facilitated in New York on ”Field Theory and Groups”. Perry had been a participant and had some comments and questions he wanted to take up with me.

He also mentioned that he would be doing his art workshop later at the conference.

When I arrived at the workshop, I was not surprised to see Lars there. When Perry opened with a reference to Velázquez and Las Meninas, Lars and I exchanged smiles. By the time the workshop had visited Manet, Veronese and the Serbian Abramovic, I was convinced: I would ask Perry to consider writing the Foreword. I did, he considered it, and he is currently drafting it in parallel with me drafting this introduction!

My friend, fellow Irishman, and Gestalt colleague in Australia, Brian O’Neill had already published me, so he and his Ravenwood Press were the obvious choice.

We had become a Gestalt of Gestaltists gestalting the book you are holding in your hands!

After I had completed Reflection #9 and finally understood the painting’s attraction – the message it had been whispering to me for many years – I got a link from Joanna to a review in The Irish Times by John Banville of a book by Michael Jacobs on Las Meninas.

Michael Jacobs had died before the book was finished, and it was completed by a friend and colleague.

I was fascinated to find that Jacobs and I had reached the same conclusion, he through his studies and knowledge and I through communicating – communing – with the painting, through my eyes and my words.

May Velázquez go with you! And Picasso. And the dogs of course!

Catania, Sicily, after a Gestalt double-conference in Taormina, September 28, 2016

As we exist only online we have no open hours, or rather: we're always open!