Fragments and pieces of an emerging suite

Seán Gaffney looks back upon his life as a family member over generations, not by describing how things actually happened, but rather directing himself to each and one of his loved ones, living or dead; connecting and filling his poems with alive feelings of joy, sorrow, anger, confusion. Gaffney has a certain spirit of humour in his writing, although his memories indicate great suffering and grievance due to life circumstances. In this book you are introduced to Gaffney’s inner relations, not just within his family but also somewhat wider, and his love and longing for connection and participation on a deeper level of life and over time.

Choose your price in the web bookstore 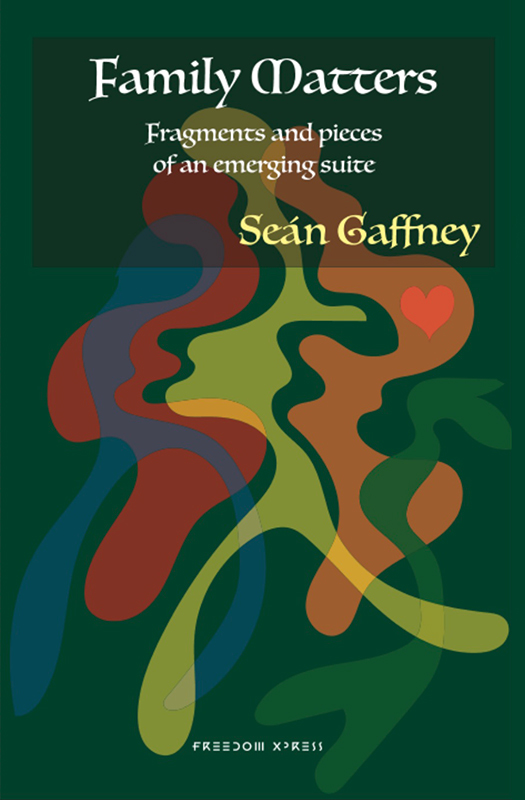 I started writing poems in my early teens, first in English and then in Irish, and much later, in Swedish after I took up residence in Sweden, which began in 1975.

I say ”poems” rather than ”poetry”, mainly because I am, at 75 years of age, still not sure what distinguishes one from the other. So at some stage way back in my youth and early manhood my poems became part of my secret private life – only my closest friends ever knew about this aspect of who I also was.

So not a poet but rather a writer of poems.

So I came out of my ”poem” closet in recent years with poems in The Gestalt Review and then my first published collection – The Las Meninas Suite, in 2016 – of which I am hugely proud.

I am still fascinated by the fact that the poems published in The Gestalt Review include reworkings of favourite drafts from the 1960’s/70’s as well as the opening reflection of Las Meninas, then my most current work.

So hardly surprising then that this book you are holding began as a poem in the Gestalt Review entitled Family Matters. A reworked version of that poem appears here as the Prologue.

I have a very Irish attraction to puns and word-games, so the ambiguity of the title of that poem niggled at me like grit in an oyster and pearled into the suite you are about to read – anyway, for me it’s a pearl. And the grit is the condensed experience of my 75 years – and that’s only of my immediate physical family of a mere three generations – mine, my parents’ and my grandparents’ – and then my pal Isa, her family, my place in it, and Isa and me.

It was just as natural for me to include the two final pieces in the Family Matters Suite. Both were written during the time I was still enjoying the emergence of an integrated whole from the pieces and fragments of which it is composed and are thematically linked – Homage to Boccherini by connecting Boccherini’s travels with his father to my memory of one journey I made with my father (even if most notable for his absence) and Getting There. For those unacquainted with Bob Dylan, the title is from his wonderful line It’s not dark yet but it’s getting there, fully in the spirit of the other Dylan’s admonition to his father not to go gentle into that goodnight, and my own existential awareness that this is precisely where I am heading, while being both gentle and otherwise!

Finally, a word about my use of ”emergent” in the title, and in the writing. I do not start writing with a finished piece in mind. In this case, for example, I did not know I was working on a suite until my sisters made an appearance…that immediately prompted thoughts about my sons…and the Boccherini and Dylans’ pieces simply slotted in as possibly relevant afterthoughts which emerged as integral parts of the whole in the context of the earlier pieces and fragments.

Emergence as an organic event also connects with that part of my professional life where I am a Gestalt psychotherapist and theoretician/practitioner with Kurt Lewin’s Field Theory as my theoretical and methodological guiding star.

So there you have it – some background to possibly inform your reading. ENJOY!

As we exist only online we have no open hours, or rather: we're always open!